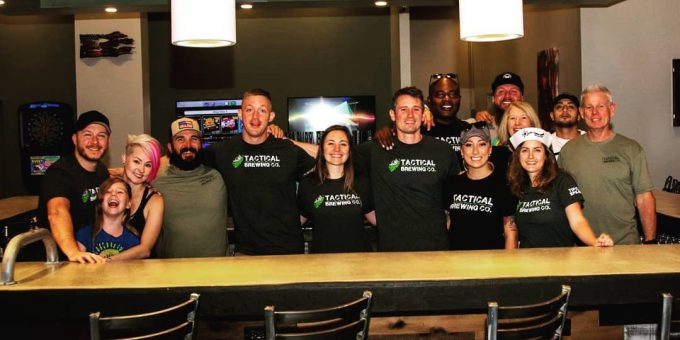 What do you get when you combine super passionate, talented people and beer?  You get something amazing.  Tactical Brewing Co. has been open for the last few weeks, and I was able to make a trip over there to see them last weekend.

Owners Doug Meyer and Kreis Holland (who is the other co-founder of Brewers Anonymous) have created a very modern space which sports a number of TVs, a merchandise area, retro video game stations and a wonderful display case full of service member medals.

Obscured by bunch of frosted glass windows is the brewhouse which is a Colorado Brewing Systems Nano Brewer Dual System which is a twin 6bbl brew system.  They also have a good number of 10bbl (I think) fermenters.  The twin system gives the crew a lot of versatility and is essentially a very large Brew in a Basket system.

The beers were phenomenal.  My wife Jenn and I took a complete tour of the tap list of beers and they were delicious.  I started out with the MRE Hop Soup which is a great Hazy IPA, and Jenn had the Base Lager which was super clean and refreshing.  Afterwards we kept working through the tap list until we each had tried everything they brewed there.  My favorite was the “Are you Open Yet” which is a West Coast IPA, and a hilarious name especially if you have ever opened or helped open a brewery before.

After having a few rounds of some great beer, we saw that they also carry Brown Paper Bag Popcorn Co popcorn, so we enjoyed some of that before we headed out.  On our way out Doug took me outback to the brewhouse for a pic of the tanks, and also a selfie.

I highly encourage everyone, especially those from Brewers Anonymous to head out there, and show some love to one of our oldest yet newest sponsors.

As of right now Tactical Brewing Co. is open on Friday’s and Saturdays from 4pm until midnight and as they catch up with production, they will be expanding their hours and hosting a Grand Opening.

I want to say a special thanks again to both Kreis, Doug and everyone else at Tactical for building such a cool place.  Keep up the great work guys!