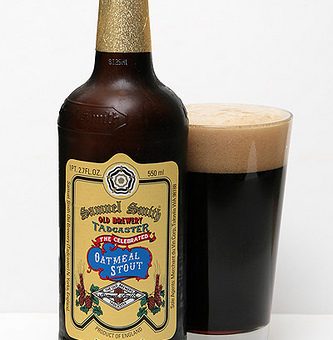 Hello fellow brewers and wanna be brewers. Welcome to a new series from Brewers Anonymous called Is This Beer For You?   The idea is to explore different beers from their history to a recipe to try. What makes them special? What are some best known commercial examples? Come along on this journey with me and suggest some of your favorites for my next article.

This first article will be about one of my favorite beers – Oatmeal Stout. Close your eyes, take yourself back to grandma’s or mamma’s kitchen and the smell of baking oatmeal cookies. The toasted oats, the biscuity  flavor.  It makes your mouth water, doesn’t it? That’s an oatmeal stout!

Stouts were first mentioned in brewing in the 1670’s, the term then referred to the stoutness or heartiness of the brew. These beers were made from a slurry of rudimentarily malted barley with the end results a brown, smoky beer. Because of the great variances in color and strength, batches of different ages were blended to create the desired finished beer. Ralph Harwood is credited with producing the first single batch version of stout in 1722.

At the end of the 19th century, there was a huge push toward healthy foods – think John Harvey Kellogg and his spa in Battle Creek, MI. By adding a bit of oats, brewers could now advertise their Oatmeal Stouts as a healthy drink.  “The beverage of the Century” was created by a small Scottish brewery called Maclay in 1896. Their health claims about their new Oat Stout said “Its tonic properties are fully demonstrated in the marvelous results produced by its use in convalescent and in chronic wasting diseases, where its nourishing and stimulating effects are admirable…”   I must say I agree with much of what they say in their advertisement!  Oatmeal Stouts grew in popularity at the beginning of the 20th century, but had all but died out by the 1970’s. Along comes Samuel Smith in 1980 to revitalize the style and is still one of the best commercial examples.

Let’s get to the good stuff. What does this beer taste like? Some of the descriptors from the Beer Judge Certification Program (BJCP) guidelines are very dark, full-bodied, roasty, coffee, nutty, earthy, milk chocolate.  Are you still with me or have you run out to the liquor store to find this gem? If you have, be sure to take a look for these commercial examples: Anderson Valley Barney Flats Oatmeal Stout, Samuel Smith Oatmeal Stout or Young’s Oatmeal Stout.

Are you ready to brew it? Is this the beer for you? There are tons of recipes online for oatmeal stouts, but hey, let’s try the President and highest ranking BJCP judge, Gordon Strong’s recipe. Gotta be great, right?

Step by Step
This recipe uses reverse osmosis (RO) water. Adjust all brewing water to a pH of 5.5 using phosphoric acid. Add 1 tsp. of calcium chloride to the mash.

Mash the pale ale malt and oats at 154 °F (68 °C) for 60 minutes. Once conversion is complete, add the crystal and dark malts as well as the roasted barley, then begin to increase mash temperature to 168 °F (76 °C) using direct heat or infusion, and recirculate for 15 minutes before beginning the lauter process. Fly sparge with 170 °F (77 °C) water, collecting 6.5 gallons (25 L) of wort.

Boil the wort for 90 minutes, adding hops at the times indicated in the recipe. A kettle fining can be added near the end of the boil, but is not necessary.

Chill the wort to 64 °F (18 °C), aerate the wort with oxygen, pitch the yeast, and ferment until complete. Rack and package the beer, or rack and clarify the beer if desired with finings before packaging (prime and bottle condition, or keg and force carbonate).

I hope you enjoyed this quick peek into the wonderful beer that is Oatmeal Stout. I’d love to hear your feedback and any suggestions you might have for future journeys into this beverage we love. Cheers!

Carol Wollard is a formerly reluctant transplant from TN. Reluctant as in a mandrake from Harry Potter’s garden being pulled from a pot! Formerly as in fast becoming the biggest FL fan ever. She started brewing as a hobby to share with her son and it blossomed into a love affair with all things beer. In 2015, she co-founded the Mid-State Brewsters, an all female homebrew group, based in Murfreesboro, TN. Before arriving in Orlando, she discovered Brewers Anonymous homebrew club via Facebook and knew it could be her new club. Carol is now enjoying the good life in Orlando, spending her free time brewing or with “THE MOUSE!”