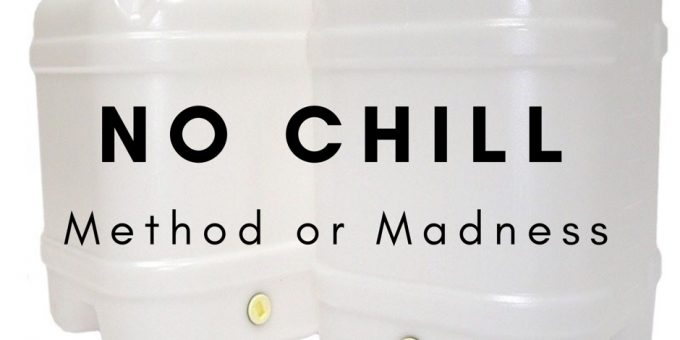 Recently, I’ve become intrigued with the idea of no-chill brewing. The idea of cutting at least 20-30 minutes off the brew day AND saving water is a no brainer. What’s kept me on the “normal” chill side is the “what ifs” about the potential drawbacks.

Most of the research comes from down under and we all know I’m partial to the Aussies…think ROBOBREW! Because there are periods of drought and water usage restrictions, brewers decided to give no chill a whirl.  The basic process up through chilling remains the same with the exception of hop additions that I’ll mention later. After the boil, the hot wort is transferred into a sanitized HDPE (high density Polyethelene) container, such as the one below and left to chill naturally to yeast pitching temperature. The wort is then transferred into a regular fermenter and the yeast pitched.

Besides the benefit of water conservation and time, I’m thinking this also has some scheduling benefits. I find that just when I want to brew that next beer, there’s no free fermenter or room in the keezer for fermenting at a preferred temp. What if I could leave this to cool for the time necessary to free up space or equipment?

But what about those “what ifs”? What are the potential drawbacks or worse yet, disasters that could be associated with this method of chilling the wort? The biggest concerns seem to be oxidation, DMS, potential for infection and chill haze. After reading several articles, I was convinced that all of these could be either overcome or minimized by using good processes and sanitization. Then to make the decision final, a fellow Brewster has made a couple of no chill batches with no ill effects and her usual great beer was the result. Below is a little bit of the interview I did with Amanda Bimson of the Mid-State Brewsters on her experiences.

Carol: What made you decide to give no chill a whirl?

Amanda: We had a water issue in the fall that made me start checking every bit of our water usage through an app our water department provides. I found that during a brew day in which both my fiancé and I were brewing, we used 100 gallons of water! I was brewing inside the house on the Robobrew and he was using the standard propane set up outside. I started that day to search for a way to cut the usage.

Carol: Where did your research take you?

Amanda: To Australia to start, where they are often restricted on water usage to the point of high penalties for over usage during certain periods. There are also Facebook groups and even a YouTube video discussing the process.

Carol: Talk about your experience and process you used.

Amanda: I’ve made my Cranberry Brown and a Gingerbread Stout so far using the no chill method. I knew the Cranberry would be a good test as I’ve made this beer yearly since I began brewing. I didn’t change my method of brewing at all with the Robobrew, but after the boil, transferred the hot wort to a 5 gallon keg, capped and took to the beer cave which is a room at our house that is not heated or air conditioned. The temperature of the room during this time was about 58F. After about 24 hours, the wort had cooled enough to transfer to my fermenter and pitch Safale S 04 yeast. I noticed that during this batch, the yeast was a little slow to take off, but I think it was because the wort was a bit cooler than the yeast likes when I pitched. As soon as it warmed a bit, it took off like a champ. The end result in taste was what I expected from the Cranberry Brown, but perhaps a bit more bitterness.

Carol: From my research, the timing of the hop additions definitely needs to be adjusted when using this method. I think maybe you agree?

Amanda: Yes, the next batch, I will be adjusting the hop additions by 20-30 min less time.

Carol: So for the bottom line? Will you continue?

Amanda: Definitely! I’m saving time and water which for me is a big win.

Some things Amanda wants to be sure to share with you if you decide to try this method:

After hearing Amanda’s positive experiences, I’m definitely going to give this a try. In fact, I think I’ll do a triangle taste test to get some feedback and see if any differences are found. Any volunteers for a taste test? Stay tuned for the results in part 2 of No Chill – Method or Madness?

If you’re interested in reading more about this, here are some places to start.

Carol Wollard is a formerly reluctant transplant from TN. Reluctant as in a mandrake from Harry Potter’s garden being pulled from a pot! Formerly as in fast becoming the biggest FL fan ever. She started brewing as a hobby to share with her son and it blossomed into a love affair with all things beer. In 2015, she co-founded the Mid-State Brewsters, an all female homebrew group, based in Murfreesboro, TN. Before arriving in Orlando, she discovered Brewers Anonymous homebrew club via Facebook and knew it could be her new club. Carol is now enjoying the good life in Orlando, spending her free time brewing or with “THE MOUSE!”