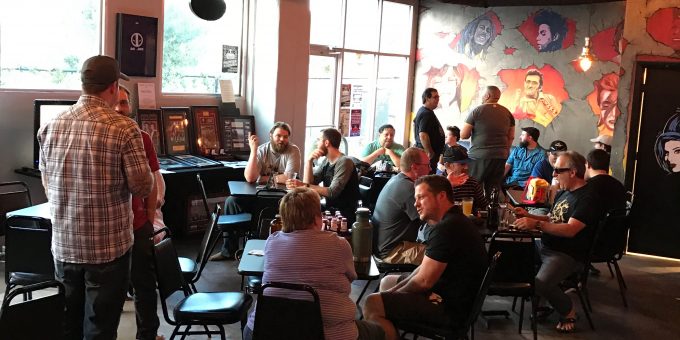 On Friday August 17th we held our Homebrew Club Meeting at Broken Cauldron Taproom and Brewery in Orlando, Florida.  We had a wonderful turnout and a ton of beers that were picked up to bring out to Commander Saaz.  We talked about club news, including our standings in the Florida Circuit.  The announcement was also made that we have an upcoming event that was put together by Jennifer Lembree at the Greenwood Cemetery.  This even will take place on Friday Oct 12th in the event.  All are invited, and we are encouraging you to brew and bring a historical beer for the event.

Part of the meeting was also to help celebrate the release of our member Noah’s beer that he brewed with Broken Cauldron as an award for winning Florida Brewers Challenge and Gathering 2017.  The beer is called “Kanter’s Lager” and is a German Pilsner which clocks in at 4.2% ABV and 20 IBUs.  It is a great beer, so be sure to get it while it is on tap in limited release at Broken Cauldron.

Once club business was wrapped up we had a neat presentation about entering beers into competition.  This was just a high level overview about entering them, placing them in the right category, and then how to package, and deliver the entries.

Once that was all done, Charles Frizzell from Broken Strings, gave us a tour of the 3bbl brewery at Broken Cauldron.  He answered some great questions and gave us a rundown of what his system is capable of doing.  He had a beer that he was chilling at the time which was then to be transferred into the fermenters.  Thank you Charles!

Thank you to everyone who showed up, and then hung around for the tour and comedy show that followed.  See you next month!