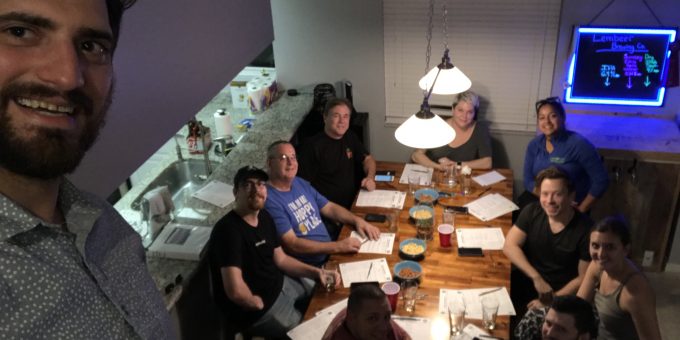 On Wednesday July 11th, we had our second BJCP Training Class.  The class covered BJCP Categories number 1, and 2 which is Standard American Beer, and International Lager.  We had 9 people in attendance and had some great conversations about what some of the potential flavors were that we were detecting.  John Sather, and Ed Allen were our BCJP Judges, and they helped field questions.  We also had some new faces to this months training which was awesome!

The two commercial examples that we sampled were Budweiser (Category 1B) and Yuengling (Category 2B). Both beers were scored highly as they were really good commercial examples of these two styles of beer.  After we had some commercial examples, we then judged some homebrew stouts that were brought by Graciany and Max.  Both were amazing beers, one was a Coconut Stout, and the other was a Pecan Pie stout.

We all look forward to seeing what we do in August, though our class might actually be held in conjunction with Lizard Cup 2018 Homebrew Competition and Festival.  This will be a great opportunity for all to come and see what a live judging session is like.  It is also a great chance for anyone to come and steward so you can start earning those BJCP points.

We plan on picking back up with Category 3 and 4 which is Czech Lager and Pale Malty European Lager.  As we keep moving forward through the styles, we will continue doing two styles a month, so this should make it easy to do homework to keep up should you not be able to make it.

See you at the next class!